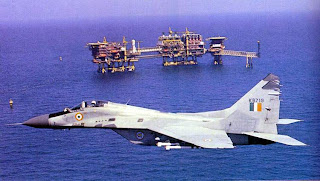 While the Mirage-2000 upgrade deal has recently grabbed the headlines for its exorbitant cost, earlier this year, Russia has started flight testing upgraded MiG-29's of the Indian Air Force. In a contract worth Rs 3840 crores, RSK-MiG was to initiate a deep upgrade of IAF's MiG-29 fleet. The value of the deal has been questioned by some, wondering if spending almost a billion dollars was worth finding out if the old dog could learn new tricks.
We would come to that question soon enough but first, some history. It is worth having a look at the world as it existed in the mid 80's, when India's original acquisition of the fulcrum happened. The Soviets were in Afghanistan, America was Pakistan's greatest friend (and arms supplier), the memory of Soviet supplied MiG-21's going one up on American F-104 starfighters in Pakistani hands in '65 and '71 was still fresh and we had recently signed a strategic pact with the Soviet Union.
In the IAF itself, barring some Jaguars and some soon to be retired Hunters and Ajeets, the fleet was all MiG. Naturally, when the threat of the F-16 appeared over the sub-continent in the 80's, IAF was willing to put its trust in the MiG-29, the latest offering from MiG design bureau.

The MiG-29 was designed as an out and out air superiority fighter to take on the best fighters NATO could throw at it and yet be rugged enough to operate from underprepared and damaged airfields at far flung corners of the Soviet Union.
After it was publicly unveiled in 1986 at a display in Finland, the MiG-29 was quick to capture the hearts of aviation enthusiasts all over the world with its seemingly physics defying aerial stunts performed at airshows like Farnborough and Le Bourget. Widely known by the NATO reporting name 'Fulcrum', the MiG-29 became synonymous with aesthetics in aircraft design and incredible aerial maneuvering, a veritable sports car of the skies.
Long before all this however, Indian experts had already checked out the MiG-29 and given the go-ahead for its induction into the IAF.

In Tri-Colour
India ordered the Fulcrum-A version without ground attack ability and three squadrons, No28 'First Supersonics', No47 'Black Archers'  and later No223 'Tridents' were equipped with the MiG-29. The squadrons were at various times entrusted with guarding the skies over Mumbai, Jamnagar, Ladakh and north Punjab. In the hands of supremely capable pilots like Wing Commander Harish Masand (later Air Vice Marshal), the then CO of the No28 squadron, the fulcrum was soon enthralling spectators all over India.

The MiG-29 brought some capabilities to the IAF that were both unique and gamechanging in the context of the sub-continent.

• The fulcrum featured a highly advanced lifting body airframe coupled with a pair of high thrust engines. Together these gave it the legendary maneuverability it was famed for.
• It could fire the beyond visual range (BVR) air-to-air missile R-27, a first for IAF, a capability not to be matched by PAF until the post 9/11 largesse from US. During kargil war, a MiG-29 was providing cover to IAF jets attacking enemy positions when a pair of PAF F-16's attempted to intercept them. The MiG pilot got a radar lock on them and was ready to fire his R-27 missiles. Clearly outmatched, the F-16 pilots withdrew.
• A passive IR sensor 'ball' gave it a silent hunter capability without needing to turn-on its radar.
• The fulcrum pioneered dogfight missiles cued by helmet mounted sights which allowed pilots to aim their missiles by just swivelling their head. The Shchlel-3UM helmet mounted sights, along with the MiG-29's proverbial agility made it an unmatched opponent in close range aerial combat.

And yet, the fulcrum had its share of shortcomings as well. For one, it was a very short ranged bird, had no ground attack capability to speak of and its avionics, while rugged, was a generation behind corresponding western designs and required high levels of maintenance.
The same was true of the Klimov RD-33 engines which had a very low MTBF (mean time between failures) value. These also had a tendency to visibly smoke at certain altitudes and weather conditions which made it easy for opponent pilots to visually detect it from afar. The cockpit's all analogue instruments panel had a cluttered feel which was not designed with ergonomics in mind, making man machine interface more laboured than in corresponding western aircraft.

The biggest problem however, was MiG corporations ineptness in supplying much needed spares post the break up of the Soviet Union. Starved of essential spares needed to keep the fleet flying, IAF fulcrums spent much of the early 90's confined to their hangars. This was a major blow to IAF's operational preparedness and shook IAF's faith in MiG corporations ability to support their aircraft.

By year 2000, age was slowly starting to catch up with the MiG-29, its R-27 BVR missile employed semi active radar homing, a technology which was a generation behind the active radar homing AMRAAMs (soon to be with PAF) or even IAF's own R-77, which could be fired from both the Su-30MKI as well as the upgraded MiG-21 Bison. It's avionics needed urgent replacement for the aircraft to remain relevant vis-a-vis the adversary up north, fighters of PLAAF. With a large part of IAF's fleet soon to reach retirement, Air HQ was frantic to search for ways to keep up the minimum requisite numbers. While new acquisitions like MRCA made up one end of this effort, at the other end in-service aircraft were sought to be upgraded in order to extend their service life.


IAF MiG-29's were considered ideal for the upgrade; since it was discovered their airframe life could be extended to 3500 flying hours from the original estimate of 2500 flying hours. To this end, India signed an agreement with Russia in 2006 for the upgradation of IAF's 69 MiG-29s. The negotiations took a long time and were finally concluded in 2008. According to the  contract worth $ 964 million, the first 6 would be upgraded in Russia and the rest would be done by HAL in India. The whole fleet would be upgraded by 2014. On completion, it would allow the fulcrum to continue in Indian service beyond 2025. As part of the 30% offset clause RSK-MiG would set up simulators and maintenance centres for MiG-29 aircraft in India .

MiG-29UPG
Air HQ opted for the Russian MiG-29SMT upgrade package, with significant India specific modifications. The final version would be known as MiG-29UPG.

The major changes include :-
• Airframe : Spine of the airframe enlarged to hold additional fuel tanks, increasing the fulcrum's total internal fuel capacity by 950 litres. IFR or inflight refueling probe is added which allows the MiG-29UPG to tank up in the air, these two factors seek to address the original version's range shortcoming.

• Stealth Features : Although this has not been acknowledged officially, there is reason to believe that the MiG-29UPG, like most aircraft of IAF these days have received some level of RAM (radar absorbent material) treatment in order to reduce their radar signature.

• Powerplant : The original RD-33 engines would be replaced by RD-33 series 3 engines, which would be produced by HAL under license. These engines no longer smoke, require lesser maintenance, come with a FADEC (a computerized system for controlling the engine) and offer slightly better fuel economy.

NOTE : Thanks to Austin for pointing out that the RD-33 series 3 comes under a separate deal valued at $ 250 million. The impact on the platform remains same however.

• RADAR : The N019 radar is replaced by Phazotron Zhuk-ME radar which, unlike its predecessor has surface mapping and terrain following modes in addition to usual air-to-air modes. This allows the MiG-29UPG to operate in ground attack roles. The detection range has increased by more than 50% and it can scan larger areas of the sky while offering better situational awareness to the pilot.

• IRST : The old KOLS IRST(infra-red search and track) passive sensor is relpaced by OLS-UEM providing much better sensitivity and range.

• Cockpit Display : The cockpit display has been completely overhauled with analogue dials replaced by modern glass cockpit with colour multi-function LCD displays offering a significantly improved ergonomic environment. Addition of a HOTAS further adds to the ease of flying for the pilot.

• Electronic Warfare : Integrated EW suite from BEL which was developed by DARE-DRDO for the LCA program would find its way into the UPG. Combining a host of functions like radar warning receiver (RWR), AESA based self-protection jammer (SPJ), HADF etc this is a very capable EW suite that would give the upgraded fulcrum a decisive edge in this extremely critical area. There is also provision for external ECM pods.

• HMDS : It is likely that the older Schlel-3UM helmet mounted sight is being replaced by Thales Topsight-E helmet mounted display system (HMDS), the same system used in the Indian navy's MiG-29K. The author has been unable to confirm this.

In addition, the new MiG is compatible with the long range R-77 air-to-air missile allowing it to engage enemy aircraft at beyond visual ranges with the latest in IAF's missile arsenal.

Quite clearly, this upgrade program breathes new life into one of IAF's most glamorous fighters and makes it a potent machine that would stay relevant for another decade and more. At the cost at which it comes, this is one of IAF's most cost effective upgrade programs to date. The beautiful silhouette of the fulcrum performing aerial ballet would continue to mesmerise Indians for some years to come. For an old MiG-29 fan like the author, that can only be good news !
Posted by Rahul M at 7:02 AM

A fine article, Sir. As part of the maintenance process, the Fulcrums would transition to On-Condition Maintenance; a practice followed on all SMT variants.

Wrote something myself about On-Condition Maintenance

You have a minor typo in your post. The acronym should be MTBO & not MTBF

You must also blog more often :)

thanks Shubhankar. actually the acronym is correct, the expansion is wrong ! it should be F for 'mean time between failures'.

excellent series that ! going to read it all now.
cheers.

This Mig 29 is my dream fighter Jet, when my age was 13. This bird is a golden eagle of IAF

What about that other comment on Zhuk M2E and not Zhuk ME?

it's a modification of the zhuk ME for MiG-29UPG. ME or more specifically M1E is for mig29K and M2E is for UPG.

Excellent summary, this! The MiG-29 has always been one of my favorite fighters.

An anecdote. The Fulcrum was designed as a frontline fighter for the VVS. What it essentially meant was that it had to go wherever the Su-25 went. That meant taking off from potato fields and running on extremely low-grade fuel (sometimes kerosene mixed with diesel). Hence the distinctive smoke trail and short-ish life. Also, the thick engine shaft allowed it to chew up all sorts of crap sucked into the engine an spit it out with little damage.

thx for the kind words Mihir.

Excellent article and informative
recently read your article on rafale, after this iam reading
wonderfull and nice analysis

Rahul M
This is the blog of the net persona Rahul M who happens to be a member of the Bharat-Rakshak Forum and a person interested in everything under the sun. Expect to see my views and opinions on history and military affairs here. Your comments and views are most welcome ! Regards, Rahul.